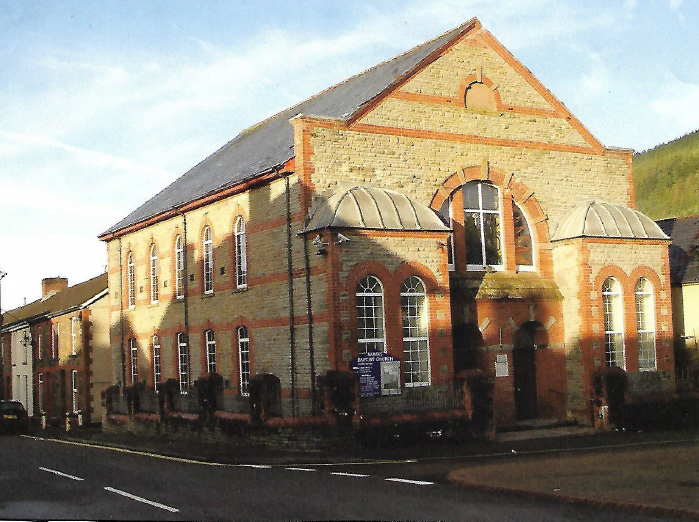 The Church was born out of a fellowship that met at 5 Company Street, Resolven.  We don’t know how long they had been meeting, however they come into membership of the Baptist Union of Great Britain & Ireland on 23rd June 1882.

That same year saw the purchase of the small chapel from the welsh Baptists for the considerable sum £100.  With 19 members by December 1889 they had raised and repaid the £100.

Some years later in 1897 The Rev. J. H Searle became the Minister.  It was during his Ministry that the Church began to grow, making the original building too small.  The first thought was to extend the current building, however after much prayer it was decided to build a completely new building.

As with any project of this size the problem of how to find the money loomed large.  Again, after much prayer and discussion the idea of subscription was presented.

The subscription list was opened and Messrs Cory Brothers (who owned the local collieries in the area started the fund with a donation of £350, Richard Cory also gave £50. Large and small subscriptions amounted to £700 and about £1500 was raised on with a mortgage.

Plans for the building were drawn up by Mr Smith of Aberdare and the contractors engaged were Messrs Wm Couzens & Co. from Cardiff.

The foundation stone was laid by Mr Clifford Cory and the new building was opened in that great revival year on 29th October 1904 at a cost of £2,200.

At the time of the opening there were 82 members who had the vision and faith to step out and create a new beginning.  During the next year starting on 26th January 1905 up to 49 people were baptised and brought into the Church through the revival meetings. The number continued to grow to 159.

In 1906 a new harmonium was purchased at a cost of £9. There are few records of the next years.  On 21st October 1923 a fire broke out in the middle of the night which damaged almost all the right-hand side of the Church, together with the front of the Church, however it is recorded that the pulpit remained standing with the bible intact.

Repairs and renovations cost £1000 including a new pipe organ.

Until 1975 the Church was on a leasehold for one shilling a year for the little chapel and five shillings for the big chapel.  In that year by what is described as a miracle the church bought the leasehold from the National Coal Board for £75.

There have been many ministers in Saris since it was formed and each has faithfully served God.  Our pastor of the last 15 years is Fortunato Santos and he originates from Brazil.  He came to South Wales many years ago to study and then teach at Swansea Bible College before he became our Pastor

Sardis continues to be a thriving and working church, we have a committed membership of 80 people as well a good congregation for our Sunday and ancillary services.  We are an active church being involved in helping other churches in the area taking Sunday Services from Swansea to Aberdare, as well as our own meetings during the week.

We have special events during the year and always invite the whole village to attend.  As you enter our village we have a lighted window at night which proclaims, ‘Jesus light of the World’.

We also have missionary aims and call ourselves a house of prayer for the nations.  We have sent out missionaries to Brazil, Las Vegas, Papua New Guinea and Las Vegas and have sent others to churches around the country.

We have a lovely Sunday school with committed teachers who love the Lord and the children in their care.

We are far from the perfect church but we do our best, we are a real family which thankfully and humbly feels it can go places with and for God.

Our highest aim is to serve God and our community. Come and join us and share time together, let us together build a better world for us and our children.

On the last Saturday of the month there is a fellowship afternoon in the Sardis Community Hall, Rugby Road.

We meet together for fellowship and friendship, with speakers and singers.  Come along and join us for some time together with refreshments.